Blockchain API: What It Is And How To Choose One For Your Project

There are so many blockchain APIs around today, and they all expose us to the various sides of the blockchain ecosystem. Most of the crypto platforms we use today exist because of blockchain APIs.

This article offers you a complete guide that includes what a blockchain API is, why it is so important, and how to choose one from the numerous options on the internet. But first, let’s take two steps back to show you what blockchain and API are.

What is a Blockchain?

A blockchain is a digital record-keeping network that is not controlled by a single entity. The data stored on a blockchain is difficult to change, replace, or be tampered with. This high level of security is why many applications, such as finance projects rely on blockchain technology.

How does this blockchain technology work?

Assume you send bitcoin to a friend. That transaction is encoded and uploaded to the bitcoin blockchain, where it gets processed. During this processing, some users verify the integrity of your transaction through an action called mining.

Once all the bitcoin miners validate it, they add your transaction to the blockchain, where it remains forever, unchangeable and uneditable. Your friend then receives your bitcoin.

While that example best describes how the bitcoin blockchain works, other blockchains follow similar processes.

What is an API?

API stands for Application Programming Interface, and it is basically lines of code that allow you to share some functions of your project with others without exposing your entire code. Hence, they save other developers the stress of rebuilding things that have already been built.

Drivers and passengers can track their current locations via a map on ridesharing apps, such as Uber and Lyft. This map was most likely not built from scratch by Uber or Lyft. It would cost too much to put a satellite in space and build the code from scratch.

Instead, the companies integrate an API from a map provider, such as Google Maps or Apple Maps, into their app. This way, Uber and Lyft can show you live map data, which you see on your phone when you use their apps.

What is a Blockchain API?

Now that you know what blockchain and API are, it becomes easier to answer the question: what is a blockchain API?

Blockchain APIs are interfaces or lines of code that allow developers to access valuable bits of data from a blockchain. These data bits are then used to build services in the Blockchain ecosystem.

An example of a blockchain API is Vezgo API, which allows you to access crypto transactions, balance, and holdings data from wallets and exchanges.

Why Are Blockchain APIs Important?

Blockchain APIs play a massive role in making today’s extensive yet interconnected blockchain ecosystem possible. Without these APIs, building applications on the blockchain will be hectic and a nightmare for developers.

Rewind to when bitcoin, the first cryptocurrency, was created. Satoshi Nakamoto’s intent was for it to replace the regular fiat currencies we use.

Blockchain APIs make that purpose a lot more possible because merchants can simply integrate the APIs into their system and be able to receive crypto payments.

This is already a great application of the technology. But a few years from now, Web 3.0 will take full force. And blockchain APIs, like those that facilitate crypto payments, will be indispensable because there would be more digital purchases with cryptocurrencies as the means of exchange.

The data on blockchains can be confusing and hard to understand for humans. Fortunately, blockchain APIs help us interpret the data, organize them, and present them in ways that are more easily understandable and easier to work with for developers.

Vezgo is a blockchain API provider that offers such a service. The API presents its gathered data in easily usable formats for developers.

Sometimes, the complex and vast data gleaned from a blockchain could be overwhelming. But thanks to Blockchain APIs, you can limit the data you get to only the important ones you need to make decisions.

For instance, the Vezgo API helps users track their crypto portfolio balance, transactions, and holdings. It becomes easier to budget, make plans, and evaluate your portfolio when you have all of these in one place.

The volatility of the cryptocurrency market exposes users to ever-changing market data. To still profit from this system, a user needs to be on top of their market data at all times. And blockchain API provides this.

CoinMarketCap is a blockchain API provider, for instance, that uses its API to offer developers the wealth of data it has on cryptocurrencies, such as price and trading.

Because the blockchain ecosystem entirely exists digitally, it offers the possibilities for digital solutions that facilitate users’ interactions with blockchain data.

A great example is how you can trade cryptocurrencies through bots without actually logging into wallets or exchanges. This functionality is made possible through blockchain APIs.

And today, users can automate their trade executions, use automated trading tools, and do so much more.

Despite the hype around the blockchain and cryptocurrencies, they are still relatively new and still fall under the inventions of the early 21st century. As a result, there are still some questions about its complexity, scalability, security, and use, especially for enterprises.

Thanks to blockchain APIs, enterprises are finding it easier to explore, extract, and use blockchain technology and its data.

The benefits are not limited to these, though. There are Blockchain API providers that offer entirely new ways to interact with blockchains, and more are being developed.

How To Choose A Blockchain API

With the vast number of blockchain APIs in the ecosystem, it can be hard to choose one for your project for obvious reasons.

First off, not all of them do the same thing. Secondly, some offer better services than others. Then there’s the question of budget.

But regardless of their numbers, there are ways to choose a blockchain API that best suits your needs as a developer. Here are some things to consider when you find yourself in this situation:

Not all blockchain APIs do the same thing. Trading bots use some to access users’ crypto accounts and make trades on their behalf. Some APIs offer access to live cryptocurrency market data.

You’ll also find APIs, like the Vezgo API, that help you aggregate users’ transactions, wallets, and holdings. At the same time, some allow users to make crypto payments for purchases. And the list of the purposes blockchain APIs serve goes on and on.

So, the first step in choosing an API for your project is to identify one whose purpose matches your needs.

Scope is the next factor you want to consider when you’re in the market for blockchain API providers. And it is essential because you don’t want to subscribe to an API that is not technically and structurally robust enough to serve all your users.

For instance, if you’re looking for an API that facilitates crypto payments for purchases, ask the providers if the API processes payments in all the cryptocurrencies that your users are most likely to use.

Similarly, you should know how many cryptocurrencies and blockchains an API can connect you with if it is a crypto data aggregator.

Vezgo is a good blockchain API example with a broad scope. The Vezgo API aggregates crypto portfolio data from close to 60 exchanges, wallets, and blockchains, including Binance, Coinbase, Trust, Bitcoin, Ethereum, and Solana.

This factor is just as important as the others on this list. And when you’re considering technology, you’re thinking about the programming languages, the architectural patterns, and the libraries used in building the API.

You can find this information in the API documentation, which is often on the provider’s website.

Let’s face it. Cybersecurity is a massive threat to digital services, including the blockchain and its ecosystem. And the more vulnerable components you have in your project, the more exposed your users’ data are.

So, when considering security, find out how the blockchain API guarantees the safety of the data it channels. Know the security protocols it uses.

The Vezgo API, for instance, is one of the most secure blockchain APIs out there. It uses AES-256 encryption, the very same one banks use. The encryption keys are then kept in vaults that no one—not even a database admin—has access to.

When an API has a history of good performance, it’s reliable. And how do you find a reliable blockchain API? By looking up reviews of other users of the API.

Also, the more customers the API provider serves, the higher the chances that it’s reliable. The Vezgo API, for instance, already serves over 100 cryptocurrencies and web3 businesses. That’s evidence of reliability.

Good customer service is also a significant factor when choosing a blockchain API. Your users don’t care that your project relies on an API with poor customer service. If they have issues with it and you’re unable to resolve them, it constitutes a bad reputation for your business.

A blockchain API is an interface that allows developers to integrate data generated from blockchains in their projects. Examples of a blockchain API are Coinbase API and Vezgo API.

These APIs are essential because they offer us access to blockchain data hubs that would be otherwise completely inaccessible or almost impossible to access.

Kraken API: Do More with Kraken via Vezgo

The 5 Best Cryptocurrency APIs For Developers 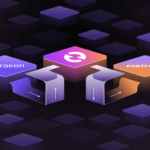 Kraken API: Do More with Kraken via Vezgo